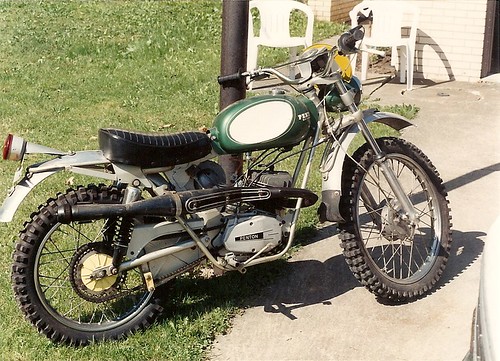 Penton motorcycles was first introduced in 1968 by John Penton, a noted enduro rider on the dirt bike competition circuit. The first Penton motorcycles were modified small bore European bikes based on the Austrian KTM, with a Sachs engine, but with improved suspension and details.

The early Penton motorcycles made their mark in International Six Days Trials competitions with riders such as future Motorcycle Hall of Fame members Billy Uhl and Carl Cranke. The most popular size was the 125cc (Six Day), but they were also made in 100cc (also Berkshire) and later, in 175cc (Jackpiner, in 1972), 250cc (Hare Scrambler, in 1973), and 400cc (Mint, in 1974). Later models utilized KTM engines, gas forks, lay down shocks, fiberglass gas tanks, plastic fenders and frames of high grade chrome-moly steel.

Other, less-common models included the Mudlark observed trials motorcycle (made by Wassell in England), the Cafe MX (a dual purpose version of the Mudlark), the Hiro 125 (the Six Day with an Italian motor), the Woodsman (an enduro version of the Mudlark) and the K-R (Kenny Roberts) short track racer. Production, development and distribution was taken over completely by KTM Austria in 1978.

View all Penton items on eBay »