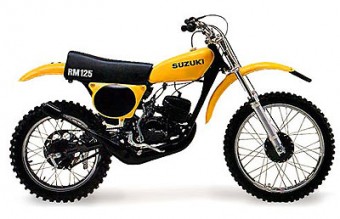 Suzuki motorcycles was started in Hamamatsu, Japan, in 1909, by a man named Michio Suzuki. When Suzuki was founded, they were producing silk-weaving looms, then they attempted to build Austin 7 cars. That venture didn’t last very long, due to the start of World War 2. Suzuki needed to focus on producing items for war use. Once the war was over, though, Suzuki produced agricultural machines and heaters, before beginning another venture in the automotive industry: motorcycles.

Suzuki’s first motor-powered bike was a small 35cc called the Power Free. It was released in 1952, followed by the Diamond Free in 1953. The Diamond Free was also a motor-powered bicycle, but it had a 60cc motor. It won its class in the Mount Fuji hill climb in its inaugural year. Suzuki’s first actual motorcycle was introduced in 1954, and was the 90cc Colleda. It was a four-stroke motorcycle, and had a good run in the Mount Fuji hill climb its first time up, as well. A 125cc two-stoke Colleda was released the next year.

The late 1950s brought about Suzuki’s first main race bike. The 125cc Colleda RB did relatively well right away, but in the end, still wasn’t good enough to please Suzuki. They acquired Ernst Degner from MZ in 1961, and he was able to teach Suzuki’s engineers about the rotary valve two-stroke. The next year, Suzuki’s 50cc bikes began winning championships and stayed on top for years. They also won two consecutive 125cc titles.

Suzuki’s first Motocross World Champion was Joel Robert in 1970, in the 250cc class. After this, Suzuki began producing a production motocrosser. The TM400R was manufactured for the 1971 season and they signed Roger DeCoster in October of 1970 to race it. The TM series included the TM 75, TM 100, TM 125, TM 250, and TM 400. These early Suzuki mx bikes are now collectable vintage machines, as well as very competitive in the pre-1974 classic scramble races. DeCoster went on to win the 1971 500cc title and the World Championship four more times in 1972, 1973, 1975, 1976. Brad Lackey became America’s first rider to win the 500cc World Motocross Championship on his works Suzuki in 1982.