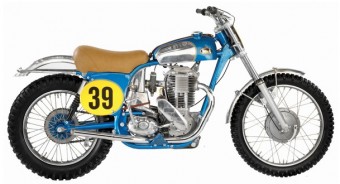 Monark motorcycles started in Sweden in 1908, by Birger Svensson. They, like many motorcycle companies, started out making road bikes, but later tapped into the motocross bike market. During World War II, Monark supplied the Swedish military with 500cc bikes that used Albin four-stroke engines. Once the war was over, they went back to making Ilo-powered 50cc and 250cc two-stroke bikes, and became Sweden’s largest motorcycle producer.

In 1952, Monark released two motocross bikes to the market: the Blue Fighter and Blue Arrow. The Blue Fighter was a 150cc two-stroke bike with a single cylinder. The Blue Arrow was a larger bike, with a 250cc twin-cylinder two-stroke engine. Both of these Monark bikes did very well in trials and motocross competitions. Eight Blue Arrows were entered in the 1954 International Six Days Trial, and all eight won gold. Even though Monark was focusing on the smaller two-stroke bikes, their 500cc Albin-run bike won the World Motocross Championship later in 1959.

In 1960, Monark gained control of Nymans Verkstader (NV) and with that, the Monark Crescent and Apollo firms became theirs, as well. Once the companies were officially merged, the overall name was changed to Monark Crescent Bolagen and abbreviated MCB. In the early 1960s, the same 500cc Albin engine and Monark frame that were used in the 1959 World MX Championship were put to use, inspiring a new “Lito” motocross line.

The early 1960s were a slow time for Monark, but they continued producing smaller 50cc and 175cc two-stroke bikes, even into the 1970s. In 1972, the Monark 125 Enduro was released, and many were bought by riders in the United States, the UK, France, and other countries. In the 1972 International Six Day Trial, both the French and Swedish teams rode Monark.

By the mid-1970s, the Japanese dirtbike manufacturers were quickly gaining control of the market. Monark first made some cutbacks, but eventually had to shut their doors. The last production Monark bikes were road and enduro bikes of 1976.