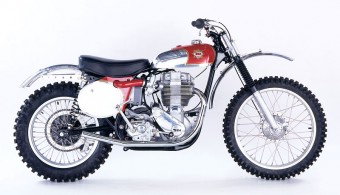 The Birmingham Small Arms Company, better known as BSA, was started in 1861 by gunsmiths in Birmingham, England. The founders had been supplying guns to the British government during the Crimean War, but when the market began to decline, they began to broaden their horizon. BSA began producing Otto Dicycles in the 1870s, bicycles in the 1880s, and automobiles and motorcycles in the early 1900s. The first experimental motorcycle was produced in 1903, however the engines came from other manufacturers for years. The first release of a motorcycle with a BSA engine was in 1910. After success, “BSA Motorcycles Ltd.” became a subsidiary of BSA Company in 1919. 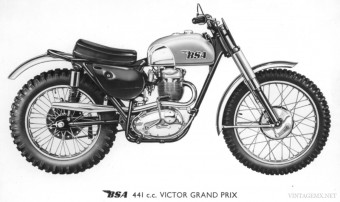 World War II brought about an increase in demand for motorcycles. Over 125,000 BSA M20s were produced for the British military over a span of thirteen years, from 1937 to 1950. The M20 was a 500cc bike, and its larger counterpart, the M21 was a 600cc bike also used by the British during the war. At WWII’s end, motocross was gaining immense popularity across the globe, and BSA of course, quickly jumped on that bandwagon.

What the world knows now as Motocross Des Nations had its start in the Netherlands in 1947. There were only three countries to enter the first competition: Belgium, Great Britain, and the Netherlands. The British team, which consisted of Bill Nicholson, Fred Rist, and Ray Scovell riding 500cc BSA scrambler bikes, won this first race, placing BSA in the history books with respect to motocross.

Since the war was over and “BSA Motorcycles” had been seeing success, they bought Triumph Motorcycles in 1951, as well as Ariel, Sunbeam, and New Hudson, making them the largest motorcycle producer in the world. The 1950s showed continued success for BSA in the mx world, with multiple top-three finishes in the European 500cc Championships. This would continue into the 60s, when they had Jeff Smith riding a B40. Smith won the World Championship in 1964, and only two points shy of a perfect record. He won again in 1965, and between Smith and John Banks, BSA stayed on the podiums until 1970.