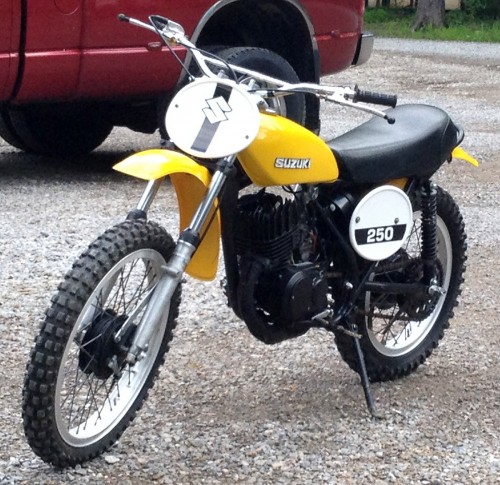 It’s been a while since our last showcase bike submission, and this one comes from Mike of Randolph, Ohio! Here we have another classic 1973 Suzuki TM-250K Champion! I think it’s safe to say that most vintage mx bikes don’t have such a clean history like this one does, and it shows.

A 1973 Suzuki TM 250 Champion, the motor’s never been apart and still has the original tires! There is new paint on the gas tank, and the bike came with the factory badges and decals. It was bought as a left over in 1974. I have the original title and bill of sale from dealer in Revina, Ohio when it was new. I still have the tool bag and jet kit for carb and factory manual. I ran it on the farm and parked for 30 years. It still will start first or second kick every time!

I don’t know what you guys think, but I would like to see a few more pictures, what do you say Mike?! Share your comments and information about the 1973 Suzuki TM-250K Champion below! 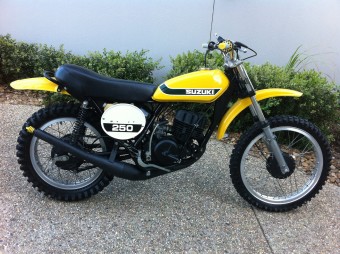 Here is a great example of another Suzuki TM, thanks to Ken Lilley of Brisbane, Australia. His 1973 Suzuki TM-250K Champion is nearly 100% period correct, and looks stunning.

A restoration designed for racing, rather than displaying in the lounge room. Future work includes finding an original pipe and the original metal frame for the air filter. The tank badge is also incorrect, it should just be a sticker.

The tank badges on the ’72 were replaced with stickers on the ’73 model along with an updated clutch.