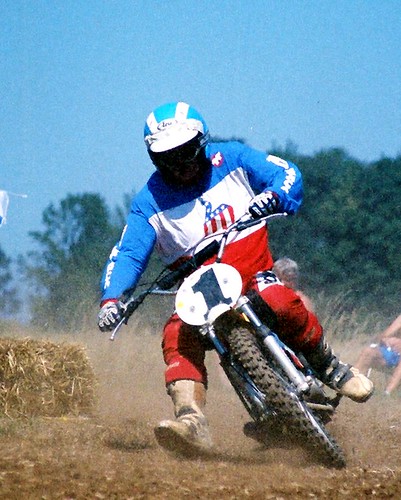 Born in Washington State on November 16, 1952, Jim Pomeroy, in many ways, would be the first American to really leave a mark on motocross history. Pomeroy began riding dirt bikes at age ten, and began racing a year later. At that time, however, there wasn’t a class for 14-year-olds and younger, so he was racing much older guys. He didn’t start winning until he was in his mid-teens. Pomeroy raced and won the Calgary Canadian Championship race at age fifteen, and from there began gaining recognition from Canada and the United States.

In 1973, when Pomeroy was about 21 years old, he went to Spain and raced his first FIM World Grand Prix Motocross race. He won that race, and became the first rider to win his debut FIM World GP MX race, the first person to win on a Spanish-made bike, a Bultaco Pursang, and was also the first American to win that type of race. Until that win, Americans were looked at as far less talented than the mx dominating Europeans. Pomeroy’s World GP race win would give American riders the confidence boost they needed.

Throughout the 1970s, Pomeroy continued making history and increasing the United States’ reputation in the motocross community. In 1974, Pomeroy won the Houston Supercross event, making him the first rider to win an indoor Supercross race. In 1975, he was the first American to lead in the Trans-AMA Championship, and in 1977, he was the first American to win a US 500cc GP race. 1977 also brought about a change in sponsorship. Until this time, he had been sponsored by a Bultaco dealer, but he left them for a factory Honda sponsorship.

Multiple injuries kept Pomeroy out of a lot of races in 1977 and 78, and in 1979 he wanted to return to the European World Championships. He was planning on riding KTM, but Bultaco persuaded him to rejoin their team. This, however, didn’t prove to be the best idea, because Bultaco was quickly losing market share to the growing Japanese manufacturers and closed their doors. Pomeroy finished the season riding for Italian manufacturer Beta.

Pomeroy decided to retire from competition in 1980, before too much damage had been done to his body. He remained devoted to the sport, though, and he competed in vintage races and taught various motocross schools. His personality gained him multiple speaking engagements, as well. He was inducted into the AMA Motorcycle Hall of Fame in 1999. Pomeroy unfortunately passed away in August of 2006 from complications received in a car accident.