Danny LaPorte is a motocross racer that had a big hand in further popularizing the sport in America. LaPorte was born in Southern California in 1957, to a father that was an off-road motorcycle racer himself. LaPorte began racing local motocross races at age 11, and soon realized his talent. He began riding at a professional level in Southern California when he was 16. He was so much better than the competition, however, that he became bored by the time he was 17. 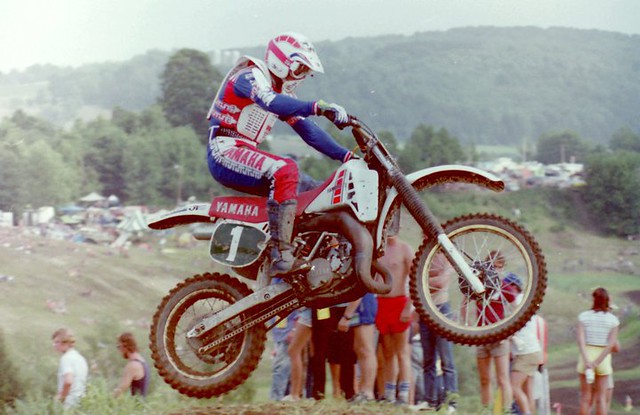 Around this same time, LaPorte made a trip to Snake River Canyon, Idaho to watch Evel Knievel’s tragic rocket cycle jump. “There was a motocross race held in conjunction with the jump and it had a $100,000 purse. I watched Marty Smith win the 125 race and I couldn’t believe it,” LaPorte said. He had previously raced against Smith multiple times, and usually beat him. Watching Smith win with such ease, and win $100,000 was the inspiration that he needed to get back in the sport. He did so well the next season that Suzuki called him, asking him to be a part of their factory team for 1976. LaPorte accepted, and made his debut in the AMA National Motocross Series on a 125.

The already well-known Bob “Hurricane” Hannah also made his National debut in 1976, and Marty Smith was racing, too. These guys took a lot of the focus off of LaPorte, but he won two of the eight races, with the first one not only being his personal first National win, but also for Suzuki in the 125 National Series. LaPorte finished his inaugural season in third place. In 1977, he tied for the championship but was awarded second place because of the number of motos won by his competitor.

The next season consisted of a move from a Factory Suzuki 125cc up to a Factory Suzuki in the 500cc class. He won the season opener, but that would unfortunately be the highlight of the season. He had a lot of bike issues, and finished the season in fifth place. Suzuki got things taken care of though, and he came back the next year to win the AMA 500cc National Motocross Championship. He also broke the top ten in the AMA Supercross Series that year, as well.

Although things looked great for LaPorte after his first championship, the next couple of years were rough. He only won one round in the Nationals in 1980, and that would be his last win. In 1981, he began racing for Factory Honda under Roger DeCoster. He managed to get on the podium four times that season, but finished fourth.

While 1981 was not proving to be the best time for LaPorte, things would change. He traveled to Germany with fellow racers Chuck Sun, Johnny O’Mara and Donnie Hansen and raced as Team USA in the Motocross Des Nations. This group of guys would be the first team to bring the victory home to America. With this win, America was finally on the map in respect to motocross, and the sport had another big popularity boost back here at home.

Folowing the amazing (and important) win in Germany, LaPorte wanted to race in the FIM World Championship Series. There were no team openings on the teams in America, so he took an offer from Yamaha’s European team and began racing the 250cc class. He won five rounds that first season, and was the first American to win the FIM World Motocross Championship on a 250.