Bob Hurricane Hannah was born on September 26, 1956, in Lancaster, California. His father was a motocross rider, and often took Bob along for rides as a child. When he was seven years old, his father got him his first bike. Many hours of Hannah’s childhood were spent riding in the desert of California, but he never raced. His father didn’t want him to race, for fear of his son getting hurt.

Once Hannah was 18-years-old and living out on his own, he entered his first race. Hannah won this first amateur race, and that would be the only race he would ever race as an amateur. He raced so much better than the other racers that the racing officials told him he would have to race further races in the expert class. 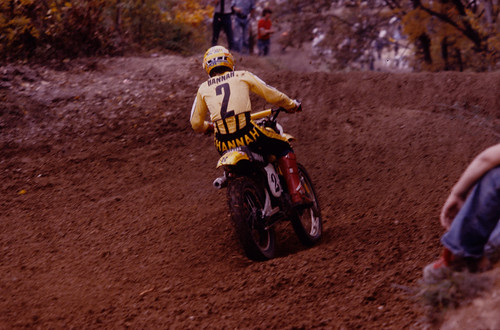 1975 was Hannah’s first complete year as an “expert” racer. He raced in two AMA Nationals events, with his best finish in sixth place. Considering he had only been racing for about a year, this was an exceptional feat. The next year, Yamaha decided to give Hannah a chance, even though he wasn’t really known but in the Southern California circuit. The then 19-year-old Hannah was signed up to race the 125cc Motocross Nationals. He won five of the eight races that season, leading to his first Championship.

Hannah rode a Yamaha 250 in the 1977 AMA Supercross Series. Even though this was his first year on a 250cc race bike, and Supercross instead of Motocross, he still dominated the series, winning six of the ten races, and his first AMA Supercross Championship. He won the Championship again in 1978 and 1979. Because of his stunning professional debut, journalists said that he came in like a hurricane, and that is why he is referred to as Bob “Hurricane” Hannah.

1978 not only brought Hannah a Supercross Championship, but also a Trans-AMA MX Championship, and an outdoor MX Nationals Championship on a Yamaha 250. He won eight consecutive races that series, setting a new record. He won six races of the 1979 Supercross Series, as well, clinching yet another Championship. A devastating water skiing accident toward the end of 1979 would cause these AMA Championships to be his last. His right leg was broken in twelve places, and he had no choice but to sit out the 1980 Supercross and 250 Outdoor Nationals Series.

Throughout Bob “Hurricane” Hannah’s fifteen-year career, he won seventy AMA nationals, which was the record until it was broken in 1999 by Jeremy McGrath. Hannah became an AMA Motorcycle Hall of Fame inductee in 1999, and a Motorsports Hall of Fame of America inductee in 2000.