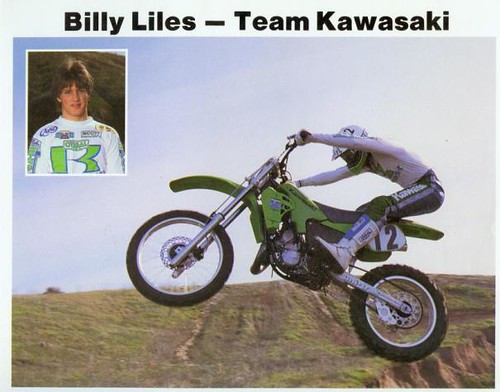 Billy Liles is a motocross racer, mainly from the 1980s and 90s. Named “Rookie of the Year” in 1983, Liles was not one of the lucky few that won a championship his first year out, but he did receive a full factory sponsorship. Billy Liles was one of the first two members of Kawasaki’s Team Green. In late 1982, riding his 250cc Kawasaki, Liles won the 250cc class at New Berlin, NY, and later in 1983, he won the AMA Pro National at Lake Whitney, TX. Liles stayed with Kawasaki for three years, but would eventually sign with Honda.

1992 was a big year for Liles. He placed third in the 500cc class of the World Motocross Championships behind Belgium’s Georges Jobe and Brittan’s Kurt Nicoll. Even bigger, when it came time for the annual Motocross Des Nations race, previous racers Damon Bradshaw, Jeff Stanton, and Mike Kiedrowski said they would not be racing that year. Team Manager Roy Jansen put together a team of Liles, Mike LaRocco, and Jeff Emig, and they delivered a first place finish for the United States! This was the twelfth of what would become the thirteen consecutive wins for the Americans.

Liles stayed in the top ten in the World Championships for six years. Although he was a great racer, a broken leg and mechanical problems kept him from ever winning the title.