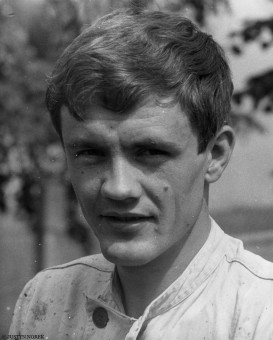 Ake Jonsson, known as the “Swedish Viking”, began riding at the age of ninteen. It didn’t take Ake long to rise to the top, he was a strong fit rider destined for championships. In 1961, he took to a Husqvarna and didn’t look back. A short three years later in 1964 he was a factory Husky rider and began racing the 1964 250cc GP series. He would go on to defeat the reigning World Champion, Torsten Hallman, and win the Swedish title in his rookie year. Jonsson was also a part of the champion 1964 Trophes des Nation team.

1968 proved to be a difficult year. Jonsson was looking very promising, but mechanical problems caused him to drop back to third place overall. Because of a contract dispute with Husqvarna, Jonsson decided to race for Maico beginning in 1969. Most of the first year was devoted to dialing in the bike, but in 1970, he again had a good run at the world championship title. Unfortunately, mechanical problems plagued him once again, leaving him with another third place finish.

In 1971, Jonsson was going into the last race of the season with the points lead over Belgium’s Roger DeCoster. Jonsson was leading the first moto of the final race when the spark plug unscrewed from the head, taking him out and putting DeCoster up front. Jonsson won the second moto, but he had lost too many points. He finished the season in second.

1972 was a much better year for Jonsson. He was racing in the Trans-AMA championship series in the United States. Of the eleven races in the series, Ake took nine victories in a row. He took 2nd and 4th in the other two races, giving him more than enough points to be the 1972 Trans-AMA champion.

Jonsson moved to Yamaha in 1973, riding on the YZ360 Monoshock. He won the 500cc Swedish championship again the same year.

In 1976, Yamaha disbanded their factory team, so Jonsson went back to Maico. By this time, though, his career had begun to wind down. In 1978 he rode an Austrian-built Rotax powered Kramer, until 1979 when he ended his career back on a Husqvarna.

Special thanks to Justyn Norek for providing his photographs for this page! Read more about Ake Jonsson here.