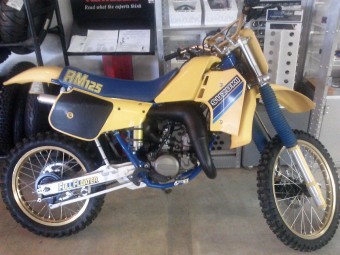 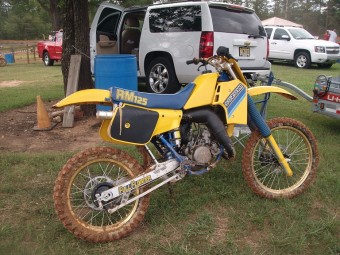 Here is some eye candy for our Suzuki lovers out there. This 1985 Suzuki RM125 hales from Roger Shipman of Hope Mills, NC. Here is what Roger says about his bike:

I bought this very low hour 1985 Suzuki RM125 in 2012. It is completely stock with the exception of a new Wiseco piston which was installed by the local Suzuki dealership tech, whom I bought the bike from. He owned it for 11 years after purchasing it from the second owner, a soldier, who never had time to ride it. The original owner was an older gentleman who bought the bike for his grandson to ride on his farm in the summer. The bike was ridden one summer in 1986 then garaged until sold to the soldier in 2000. It still has the original tires with about 70% tread left. I took it to the local track for 3 laps just to see how it works and it ran perfectly. Enjoy.

Thanks for sharing your Suzuki with us Roger!