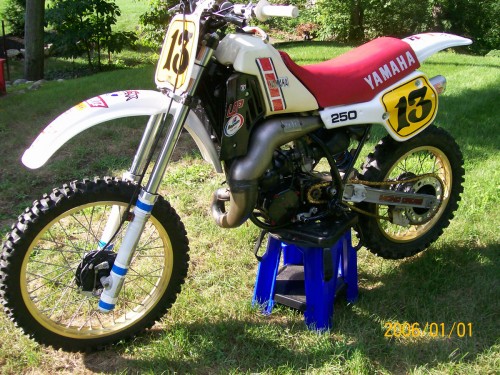 Thanks to Paul Holmstrem of Burlington, Massachusetts for sharing his 1983 Yamaha YZ250K Euro model. Many of you might know, the European (and Australian) model Yamahas sported the red and white look since 1974 and in Canada since 1982. The red and white models didn’t go state side until 1985.

Here’s what Paul says about his Yammerhammer:

Here’s my recently finished 1983 Yamaha YZ250K. This bike is a true survivor that was freshened up top to bottom. The motor was rebuilt: crank seals, bearings and fresh top end. Mild porting, Boyesen reeds, full DG exhaust and silencer. The shock was completely rebuilt along with a new custom wound spring. The forks are fresh, as well as brakes and new plastic. She is very tight and not built for your living room. It puts a lot of them 4 strokers in there place. Long live 2 smokers!

Thanks for sharing, Paul! What we have here is another beautifully re-done 1983 Yamaha YZ250K, this time with the red and white plastic that was distributed in Europe, Canada and Australia. So it’s no surprise that this bike comes to us from Rohan of South Australia.

The list of new parts on this zinger is a mile long. Here is what Rohan says about his YZ:

The bike was completely gutted, the frame powder coated and everything that could be replaced, has been replaced. The engine has had a full rebuild and re-bored. The bike is all finished, with a grand total of 4,200 AUD invested. I think we can all agree, Rohan means business when he rebuilds a bike. Great job on your ’83 YZ250 Rohan, thanks for sharing it with all of us!