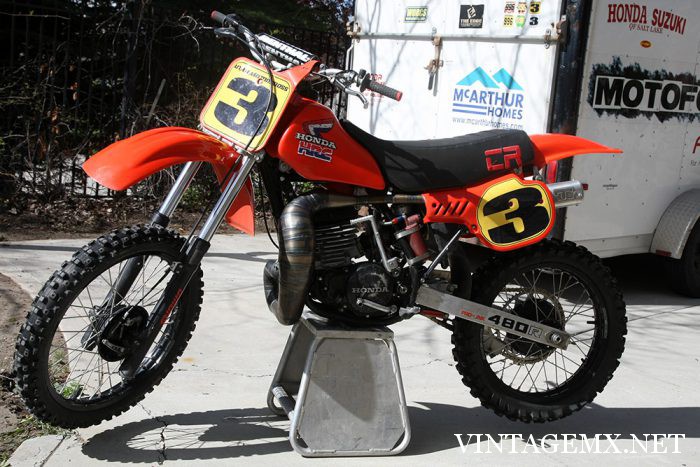 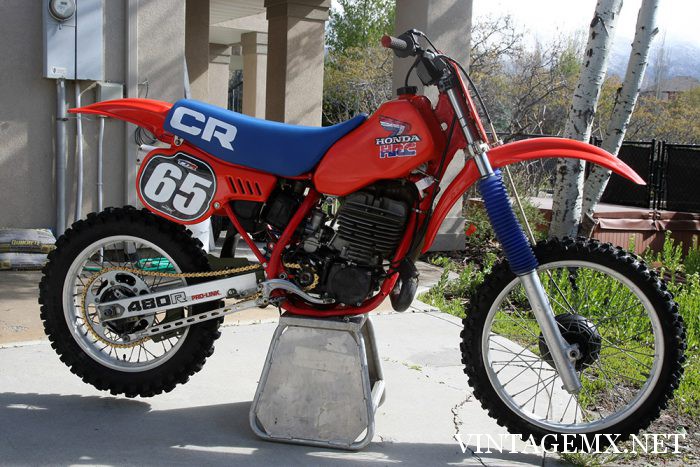 Check out these 1983 Honda CR480R showcase bikes from Steve McArthur, the owner of motofotos.net! These left side kick starting beasts have been lovingly restored, modified, and winning races since they were rescued by Steve!

1983 Honda CR 480, just finished the race season on her… she took first! I started with a running basket case, took her down to the frame, powder coat, fresh top end, plastic, seat, suspension rebuild, tires, bearings, bars, controls, pegs, etc. The jetting was way off, but once I got that close, she woke up! Fun bike to ride, and now that the suspension is done, she doesn’t mind the big jumps that today’s tracks all have. The ’83 480 was “the” bike to have back then (or maybe a Maico 490). Left side kick is unique, and with the short throw of the kick starter, the compression release valve I added was a must. Now the kick is more like a KDX 200, and the bike starts easily. Little things like taking 2012 CRF 450 pegs, and grinding them to fit make a difference. Easy mod done with pegs that were in the cabinet! Let’s take a look at the second 1983 Honda CR480R. Here are Steve’s list of customizations on this red rocket. The CR480R model replaced Honda’s questionable 1981 CR450R model in 1982. Honda kept the heat on their competition with the winning 1983 Honda CR480R. The 1983 Honda CR480R was and still is, one of the best open class bikes, ever. The 472cc air cooled engine featured a reed valve and fueled by the 38mm Keihin carburetor. What is extremely impressive is the bike’s weight, a slim 226 pounds. The 1983 was even better than the 1982 model with updated Showa adjustable 43mm forks and Pro-Link rear suspension. A new design, a fifth gear added, geometry, and tons of weight saving aluminum components like the pegs, kickstarter, and muffler put the 1983 Honda CR480R as one of the best handling, powerful, and fun bikes to ride!

Did you have a 1983 Honda CR480R? Do you still have one? Tell us your thoughts and comments below! Thank you Steve for sharing your classic Honda mx’er!